What's Next for Connected Car Technology? 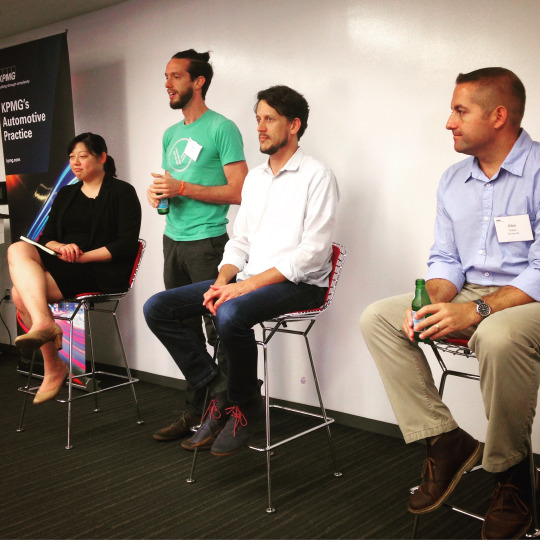 We just got back from a Connected Car Meetup, hosted by Vinli and KPMG. They talked about how close we are to the Jetsons, why Apple is the new Lexus, how even jalopy drivers can enjoy the latest technology.
The Connected Car conversation was led by the following:

Blake acknowledged that the Jetsonian vision of autonomous, flying cars might not be imminent. True, but, countered Alex, today’s technology, such as lane-departure warnings and adaptive cruise control, can be combined to the point where “the driver is almost incidental. It’s here now, it’s just not legal.”
To prove the point, he referenced someone who – don’t try this at home! – had taped a can of soda to the steering wheel of the whiz-bang-tech-filled Mercedes S-Class in order to convince the car that a human hand was on the wheel. With that ‘reassurance,’ the car drove itself along the highway without any human intervention. Nada. Don’t believe it? Take a look – as Road & Track joked, “Forget the Google Car, get an S-Class and a Coke.”

Sick of your commute? Grab a soda and some duct tape. Look, ma – no hands! (via Road & Track / YouTube)

Leila’s next topic centered on the recent JD Power “Driver Interactive Vehicle Experience” (DrIVE) Report, where 4,200 vehicle owners were surveyed about the vehicle technology they liked, disliked, and even had, but didn’t use.
Years ago, Alex said, “When I bought a car, the first thing I’d do was rip out the stereo,” but that auto manufacturers have since bundled the telematics systems, de-incentivizing that kind of modification, instead focusing on the user experience.
In today’s difficult-to-modify vehicles, aftermarket devices, like Vinli, help to meet customers’ needs, and tech companies are able to move much faster than auto manufacturers ever could. But, Blake mentioned, some other companies’ early efforts fell flat, not clicking with consumers. He said that Vinli’s founder and CEO, Mark Haidar, was careful to consider the transportation landscape, acknowledging the importance of vehicle-to-vehicle communication infrastructure to truly transform mobility.
The group then moved on to the topic of the vehicle-ownership experience, given the assumption that brands would eventually integrate user-friendly technology. “Long term, what will differentiate a Ford from a Honda?” Blake laughed, “That’s not our problem!”

Alex mentioned that one of Tesla’s huge unsung advantages is its ownership experience, partly because its interface is essentially “the world’s biggest iPad.” He recounted the story of a Tesla owner who’d called the company about an issue with his car, and Tesla remotely flashed a software upgrade, providing an immediate fix.

Blake recalled that the ownership experience had propelled the Lexus brand in its early days, noting that potential buyers would choose Lexus over Toyota simply because they wouldn’t have to wait for an oil change; it was always a first-class experience. Now, said Blake, “Apple is what Lexus was.”
Alex mentioned that there’s a strong emotional component to vehicle styling, but said, “absent badges, people will consider what’s the best car to own based on level of service” that the brands would provide its customers.
Leila then opened questions to the floor. And even though Openbay was well represented, its team did not have anything to do with planting the first question, from Ned, who asked about automotive repair, and when a “super app” would help cars to communicate between their drivers and auto repair shops. We couldn’t introduce ourselves quickly enough!
Openbay’s VP of product, David Vallance, gave a quick rundown of the basics: that Openbay is an online marketplace for users (who know what’s wrong with their cars) to request service and choose the best mechanic before booking the service. Ned’s super-app dreams will come true, thanks to OpenbayConnect, which gives the car a voice, remotely determining cause and cost of automotive repairs. When something goes wrong, the vehicle will communicate its issue directly to neighborhood service providers, gather quotes to complete the work, and then alert the driver of the problem and the proposed solutions.

Blake confirmed that products like Vinli would provide “the scaffolding and the product” for companies like Openbay to provide a rich user experience, and that “The democratization of technology means it doesn’t matter what kind of car you drive.”
There was lots more discussed at Vinli & KPMG’s connected-car meetup – about whether millenials want cars, and if so what kinds; the pain of OEM navigation systems; which manufacturers have seamless integration with mobile devices, and how some car companies are fearful of innovation coming so fast, complaining, “They want us to act like software companies!”

Want to join the conversation? Check out Vinli – its Dallas-based evangelists are traveling the globe, doing great stuff and encouraging conversation about innovation and mobility. Hope y’all come back soon, now… maybe in a car that drives itself? Thanks for including the Openbay team; we enjoyed the ride!

Sep 2, 2015openbay
Meet Bob: It's All About the Superior Customer ServiceCheck it Out: Openbay’s Dashboard Redesign!