Stop Tailgating with the Three-Second Rule 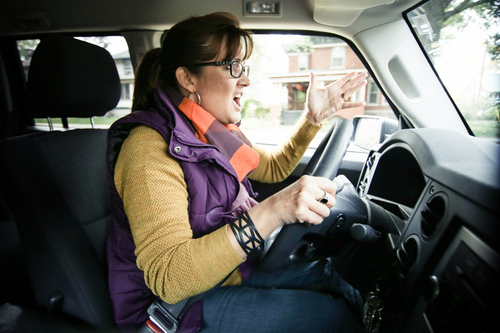 Football season is in full swing, and tailgating is on the brain. But this American pastime shares a name with a very aggressive and dangerous driving behavior: following other cars too closely. This is important stuff – apparently aggressive drivers kill two to four times more people than drunk drivers – and if you’re a tailgater, you should heed the following advice on how to stop.
Here’s a quick quiz to determine whether you might be a candidate for Tailgaters Anonymous:

If you answered “Yes” to any (or all) of these questions, you’re probably guilty of following the vehicles ahead of you too closely. But don’t give up on yourself. Being a compulsive tailgater is an aggressive-driving behavior that can be changed. You just need to school yourself on how to know if you’re too close for safety’s sake.

One of the most frequently taught (and subsequently forgotten) methods of determining how far back you should keep from the car in front of you is called the “three-second rule.” As you’re driving, pick a stationary object on the side of the road like a sign post or an overpass. When the car ahead of you passes that object, start counting. You should be able to reach a count of “three” before your own car reaches the same place. And we’re not just talking a quick “one-two-three” – we mean a full three seconds, Mississippis and all.
The official rules for maintaining a safe following distance say that you keep one car length between you and others drivers for every ten miles an hour you’re moving – but who wants to do math? Plus, not everyone’s good at accurately gauging car lengths. If you stick to the three-second rule, you’ll be good.

When to Add More Seconds

It’s important to remember that the three-second rule is the minimum suggested following distance under optimal weather conditions. If it’s a sunny day and the roads are dry, allowing yourself those three seconds adds a safety buffer that will give you enough time to react and take evasive action. But sometimes those three seconds might not be enough. Double up on the three-second rule if you’re driving at night, in heavy traffic, or in poor weather conditions.

One of the biggest challenges involved in practicing the three-second rule is the fact that not everyone does it. Take a look around you the next time you’re driving. You may be surprised at the vast numbers of drivers who fail to maintain a safe following distance, especially at highway speeds.
Other drivers often jump in front of you if you leave sufficient space, preventing your aim to play it safe. When this occurs, slow down and increase that buffer zone again. Be a good example for others on the road around you. Although it may feel like you’re extending the length of your commute, the fact remains that getting into an accident will cost you a heck of a lot more time.
In addition to following the rules of the road, remember the best rule of thumb for keeping your car in good working order – use Openbay. Compare pricing and book service from quality local shops with the click of a button. Openbay is car repair for today’s world.