Do As I Say, Not As I’ve Done: Ezra Dyer’s Driving Rules 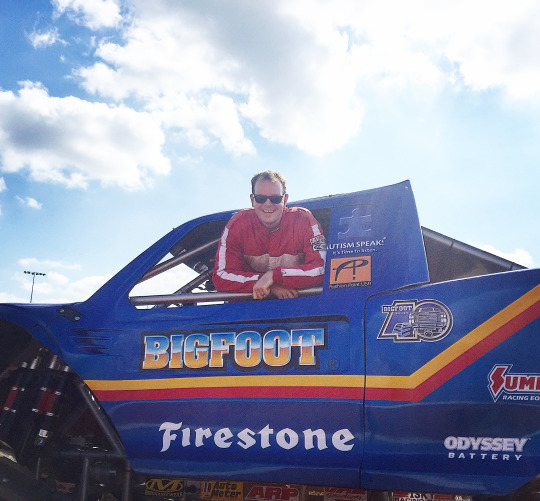 Ezra Dyer in BigFoot, “which I drove at the dirt track/monster truck course in Charlotte. Highlight of my life.”
Ezra Dyer is one of the industry’s top automotive writers – he started his career as something of a legend, as hilariously detailed by Automobile magazine, when, at only 23-years old, he got a foot in the door by pitching them a piece about his first car. It was a 1985 Camaro IROC Z28, which he’d bought off a Catholic priest (The vanity plate read “CHRISTN.”).

Since then, Dyer has written for NY Times, Esquire, Men’s Journal, Robb Report, the Improper Bostonian, Yahoo! Autos and Car and Driver (among others) and he’s now automotive editor at Popular Mechanics.

In his younger days, before his career enabled him access to cover serious topics – like driving BigFoot, or joining the U.S. Border Patrol in Yuma (donning a fake mustache and driving Ford Raptor, so he’d blend) – Dyer was prone to breaking the rules while behind the wheel. Now, he’s got a couple of kids, and when they’re of driving age, he’ll be laying down some serious rules.

Ezra Dyer’s “Do As I Say, Not As I’ve Done” Rules for the Road

Dyer in his driveway with an Aston Martin DBS and a Rolls Royce Ghost. Rather than take himself seriously, he poses with a fake lion, like the “Rich Guys with Lions of Instagram.”

“Maybe the ‘overdriving your headlights’ example is a good one for non-morons.”
“I’d also add that if you want to figure out how your car really handles, do it in the snow. Or at least, at low speeds. The only times I lost it (spun) with the IROC were in first gear. So I had an idea of what not to do while going, say, 50 or 60. Or faster.”

Here’s Ezra’s IROC, minus the “CHRISTN” vanity plate.
***
If National Car Care Month has you looking for more serious advice on driving and car care, here are some tips from another auto pro, and from yet another.

When it’s time to repair or maintain your vehicle, check out Openbay, which allows you to compare, book and pay for local auto repair online or via mobile app (on iOS and now Android).