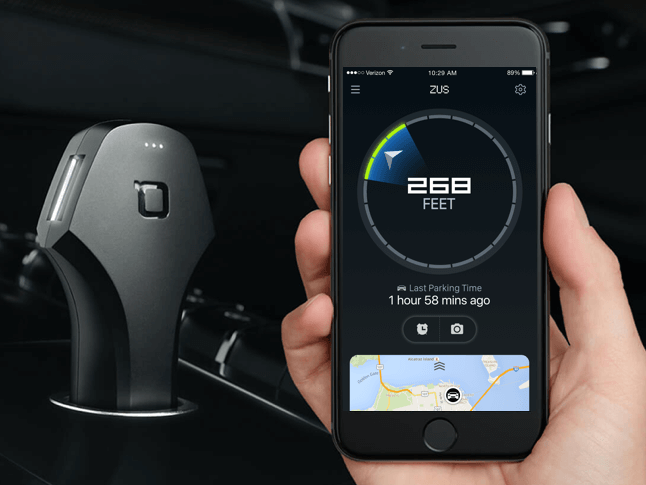 You know the saying, “When it rains it pours”?
We recently had a day like this – we were driving around town, interviewing Bob at Bonded Transmission & Auto Repair, along with another offsite meeting, had some meetings back at the office in between, and – of course – had forgotten to charge the phone while briefly there. Toward the end of the day, we hopped in the car, and called up Waze to find a low-traffic route, and realized the battery life had plummeted to the point where we might have been left to ask a stranger for directions, which would make us late, and without the ability to call or text to say as much. Panic struck.

Luckily, a few months earlier, some nice folks at Silicon-Valley startup, nonda, had contacted us to see if we’d like to test a new dual-USB car charger, called ZUS. Before we knew it, the box arrived in Cambridge, with packaging looked like it came straight from Apple – clean lines, clear messaging about the powerful output and its car-finding magic – and we practically had to use the jaws of life to pull the charger out of the sturdy case. Over the course of a few drives, we enjoyed the ZUS, but hadn’t quite realized its potential until the “when it rains it pours” day, when the almighty ZUS had a chance to show its charging might.

On the way to the meeting at Bonded, we were fumbling around, looking for a car charger, and found one – the cheapo version bought as a last-minute add-on while at the CVS counter one day. Surely those types of in-car chargers are littering cars across the world, but here’s the problem – they don’t work. We’ve spent countless drives with the phone plugged in for an hour, without second thought to the fact that the cheap charger’s flimsy hardware had needed to be positioned just so, in order to actually charge the phone, meaning the phone would unexpectedly be be dead on arrival. Those cheap chargers give nothing more than a false sense of security.

Eventually, the ZUS materialized. The success of the day hinged upon its reliable plugs, as well as the jolt of juice it would deliver. ZUS has a host of benefits, including a vehicle-locator tool, as long as the charger remains plugged into the car.  The mightiest benefit of all is its 5-volt supercharging ability. ZUS will charge not just one, but two phones or tablets, twice as quickly as most car chargers. It’s often even faster than most of those wall chargers you have lying around the house.

ZUS is perfect for those who are perpetually undercharged, running late, and/or whose clunker cars are teetering on the edge of needing roadside assistance. Our own unscheduled personal stress test confirmed the ZUS car charger as a worthy investment. In exchange for promises of pre-meeting sanity and the maintaining the holy grail of constant connectedness, it’s well worth it!

If your problems are more auto repair-related, than low phone battery-related, try Openbay!